In latest coronavirus data, Colorado researchers can glimpse the end of the pandemic
January 27, 2021
Tech
Uncategorized
As long as the state maintains current levels of social distancing, the risk of overrunning hospitals has likely passed, according to new modeling projections. This is how the coronavirus pandemic will end in Colorado: perhaps with a final surge but likely in a long, gradual decline, like springtime snow receding from a mountainside. As vaccinations pick up across the state, giving protection to the most at-risk, the chance of hospitals being overwhelmed shrinks, according to a new modeling report released Tuesday. If Coloradans continue to maintain the current levels of social distancing and mask-wearing, the peaks of the pandemic are behind us. If the state remains vigilant, not even the more transmissible U.K. variant of the virus that has been found in Colorado can change this trajectory. COVID-19 IN COLORADO The latest from the coronavirus outbreak in Colorado: Public health leaders are still cautious — the coronavirus has pulled tricks before and much depends on whether Coloradans do their part. But the leaders are also increasingly optimistic: This is the downhill slope. “What I’ve been saying is we’re not out of the woods yet,” said Elizabeth Carlton, a professor at the Colorado School of Public Health who is one of the researchers working to create modeling projections for the course of the pandemic in the state. “I think it would take a pretty dramatic increase of the variant and a pretty dramatic increase in contacts for us to get to a point where we’re concerned about hospital capacity being exceeded. So a lot would have to happen.” “It’s possible,” she said, “but if I had to guess I would say it’s not very likely.” The report released Tuesday for the first time attempts to estimate the impacts of both the statewide vaccination campaign and the new variant on how the pandemic will play out in the coming months. There is a lot of uncertainty about the latter — researchers have to make assumptions about how fast it will spread and whether illnesses from it will be more severe. Though there are only 10 confirmed cases of the variant so far in Colorado, the report estimates the variant will account for the majority of cases in the state by mid-March.

The report models 12 different scenarios for the coming months, based on varying levels of transmission control, the rate of vaccinations among those over 70 years of age and the spread of the variant. (Transmission control is an estimate of how everything Coloradans are doing — social distancing, mask-wearing, hand-washing, etc. — is impacting the spread of the virus. The state is currently at 78% for transmission control, the report estimates. Higher percentages mean less spread.) In only one of those scenarios does Colorado risk overwhelming its intensive-care hospital capacity, and it is also the least likely to occur. In that scenario, the state sees rapid spread of the variant, drops its level of transmission control by nearly 20 percentage points and fails to hit its goal of vaccinating 70% of Coloradans age 70 and over by the beginning of March.

Charts from a Colorado School of Public Health modeling report released Jan. 26, 2021, show projections for the course of the COVID-19 pandemic based on several scenarios and different levels of transmission control. The dark blue line includes estimates for the impact of the statewide vaccination campaign and the new U.K. coronavirus variant. (Screenshot)
As long as Colorado reaches the vaccination target and maintains at least 60% transmission control, the state will not breach its hospital intensive-care capacity, according to the modeling projections. Gov. Jared Polis has said repeatedly that the state is on track to reach the vaccination goal. Meanwhile, 60% is the lowest level of transmission control the state has seen since the pandemic began — it is akin to where Colorado was in the fall, right before the state experienced its largest surge in coronavirus cases, hospitalizations and deaths. 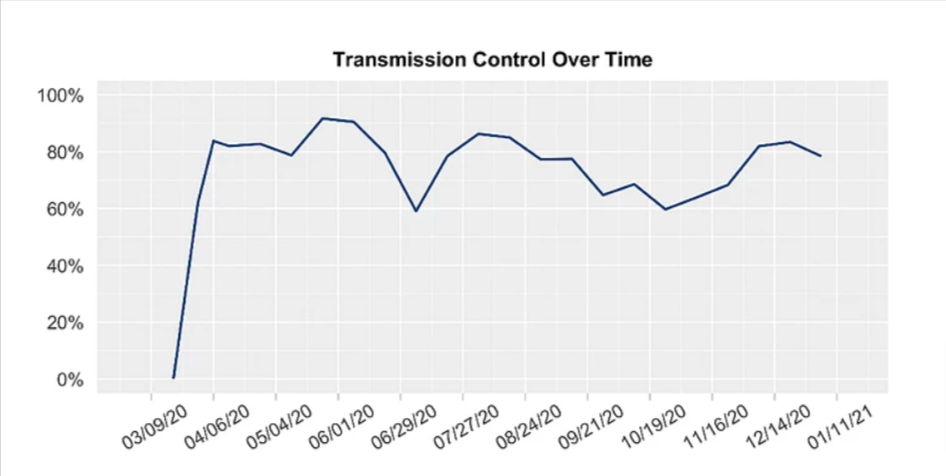 A chart from a Colorado School of Public Health modeling report released Jan. 26, 2021, shows estimates of transmission control throughout the COVID-19 pandemic. (Screenshot)
“If we’re able to maintain our current level of transmission control … for the next few months, at least through June 1, that’s really our best way to limit the impact of COVID-19 in the state,” Dr. Rachel Herlihy, the state epidemiologist, said at a news conference on Tuesday.

That was the good news. But Carlton, the public health professor, said hospital capacity is not the only measurement of success, and the modeling report also forecasts much sorrow in the months to come. In the best-case scenario, at least 500 more Coloradans with COVID-19 will die by June. In the worst-case scenario — the one where hospital capacity is exceeded — that number is around 11,000 additional deaths. To date, about 5,500 people with COVID-19 have died in the state. Even a little slip — from the current 78% transmission control to 70% transmission control, roughly where the state was in late summer — could result in an extra 1,000 deaths. “There is still a lot of loss ahead,” Polis warned Tuesday. “We could lose hundreds or thousands of Coloradans. … How many, exactly, is really in your hands.” TODAY’S UNDERWRITER And Carlton said it’s not just deaths. People with severe cases of COVID-19 can lose limbs or suffer long-term organ damage. Hospitals can still become strained. She pointed to December, likely the state’s deadliest month ever, when nurses and doctors felt pushed beyond the limit. “It is possible, if control lapses, that we could go above December’s numbers,” she said. Polis has often likened getting through the pandemic to running a marathon, 26.2 miles. On Tuesday, he put a number on it: We are at mile 23. So, yes, this is likely the final stretch. But it doesn’t mean the race is over. “We just have to make sure to finish it strong,” Polis said. The caption for the photo at the top of this story was changed on Jan. 27, 2021, to correct the name and gender of Dr. Aradhika Parmar. The Sun apologizes for this error.