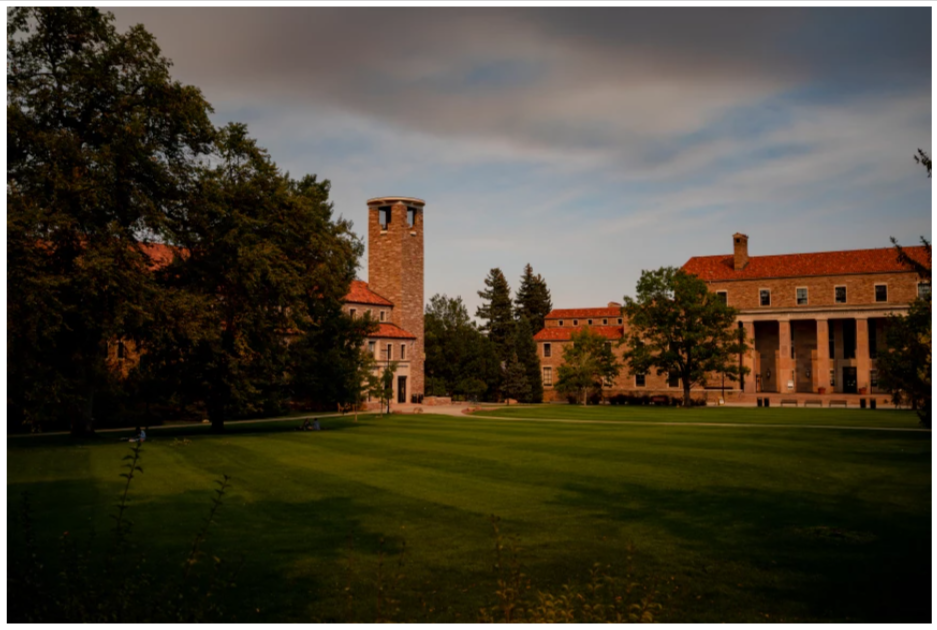 The Norlin Quad was devoid of students on Wednesday, Sept. 30, 2020. As coronavirus cases spiked at University of Colorado Boulder, county health officials cracked down, prohibiting gatherings of people aged 18-22.

New COVID-19 cases have increased in much of the Denver metro area, and county health departments are trying to persuade their residents they need to keep their distance to avoid new stay-at-home orders.

The Colorado Department of Public Health and Environment’s new dial framework places each county in one of five color-coded levels, with increasing restrictions on business capacity and event sizes.

Each county’s level is based on the rate of new cases compared to population, the percentage of COVID-19 tests coming back positive and how hospitalizations are trending.

As of Friday, 15 counties, or almost one-quarter of the state’s counties, had rates of new cases that could push them to issue additional restrictions if nothing changes. They get at least two weeks to bring the numbers down before more restrictions are on the table, though.

Unlike this spring, when businesses across the state were ordered to shut down, counties are trying to avoid closing large numbers of facilities through awareness campaigns, or targeting orders at populations where the virus is spreading more freely.

John Douglas, executive director of the Tri-County Health Department, said it appears private gatherings are causing a significant portion of the spread in Adams, Arapahoe and Douglas counties. It’s difficult to be sure, though, because not everyone is cooperating when contact tracers call, he said.

Counties could take action if they get multiple complaints about a household hosting unsafe numbers of people, but most of their efforts are focused on convincing people to wear their masks and keep their distance from others until a vaccine is approved, Douglas said. People are tired of social distancing, but sticking with it increases the odds of avoiding a winter surge and new stay-at-home orders, he said.

“The higher we are through the month of October and early November, the worse shape we’ll be in by Thanksgiving and Christmas,” he said.

Nathan Fogg, director of emergency management for Arapahoe County, said metrics like hospitalizations and test positivity are relatively low, so it’s not necessary to put restrictions on businesses at this point.

Earlier this year, Arapahoe County had an increase tied to outbreaks at businesses, which came down after officials targeted messages about the public health guidelines and resources to help meet them to hot spots, Fogg said. This time, they’re relying more on traditional and social media to reach individuals, he said.

“This one, I think, is going to be more about getting back to basics,” he said.

Adams County posted a warning on its website Thursday, stating that if cases aren’t brought under control, the county could move into the second-highest (orange) level, requiring gyms to close and restaurants to reduce their capacity. It urged residents to avoid even small indoor gatherings, unless absolutely necessary.

“We have been told by the state that if we don’t reverse these alarming trends, we are at risk of further restrictions,” County Manager Raymond Gonzales said in the posted statement. “After six months of dealing with COVID-19, we all know there is no magic button to push. We all have to play our part to reign in these discouraging trends in positivity.”

When the rate of new cases starts rising, that “triggers a conversation” with the state health department, said Bob McDonald, director of the Denver Department of Public Health and Environment and Denver public health administrator. Denver County is in the middle (yellow) level, but its new cases were high enough that it could move to the orange level.

Health department attempt to figure out where the cases are coming from, and whether it’s possible to bring them down without sweeping orders, McDonald said.

Colleges were one significant source of spread in Denver, and the health department issued an order in late September requiring colleges to screen everyone on campus for symptoms, restrict visitors to student housing and suspend sports practices if a team member tests positive. Right now, cases appear to be leveling off, but it’s too early to declare victory, he said.

Boulder County took the population targeting even further, and set up its own four-level framework for people aged 18 to 22. It’s based on how widespread testing is among University of Colorado Boulder students, the positivity rate for that age group and how many new cases that age group has per 100,000 people. Gatherings of up to six people are allowed under the least restrictive conditions, and no gatherings are permitted under the tightest restrictions.

Jeff Zayach, executive director of Boulder County Public Health, said last month’s ban on young adult gatherings and stay-at-home order for certain properties brought the rate of new cases down significantly. As of Friday, the county’s cases had fallen far enough that it was no longer at-risk of moving up a level.

“Our goal is to get back to our baseline,” he said. “We’re still not there, but we’re moving in the right direction.”

The stay-at-home orders at the beginning of the pandemic slowed the virus’ spread, but also required putting much of life on hold, McDonald said. The goal now is to keep the virus in check with general precautions, and then target specific trouble spots like college parties or people not wearing their masks in Denver’s entertainment areas, he said.

“If we stop cases wherever they might be, you reduce the risk of that spreading to more vulnerable people,” he said. “We don’t want to go back to the early stages of the pandemic.”