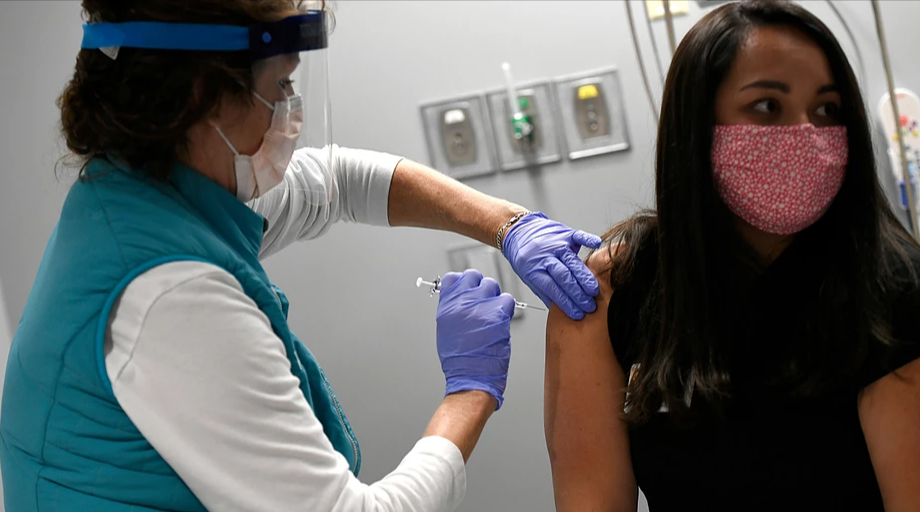 Vail Health Hospital nurse Diane Schmidt, left, gives a mock COVID-19 vaccine to Caitlyn Ngam, right, an infection preventionist at the hospital, on Dec. 8, 2020 in Vail. (Pool photo by Helen H. Richardson/The Denver Post)
A distribution plan unveiled Wednesday by the Colorado Department of Public Health and Environment prioritizes health care workers, and nursing home residents and staff for the first doses. Jesse Paul@jesseapaul The Colorado Sun — jesse@coloradosun.com Desk: 720-432-2229 The general public in Colorado likely won’t have access to a coronavirus vaccine until the summer of 2021, state officials said Wednesday, though inoculations for health care workers and nursing home residents could start within a week. A distribution plan unveiled Wednesday by the Colorado Department of Public Health and Environment prioritizes health care workers, namely those who interact with COVID-19 patients, and nursing home residents and staff for the first doses of vaccine in what’s being referred to as “Phase 1A.” Since coronavirus reached Colorado early this year, nearly 1,400 residents of nursing homes and senior care centers have died from COVID-19. More than 5,700 nursing home staff have caught the disease and as many as 10 have been killed by it. COVID-19 IN COLORADO The latest from the coronavirus outbreak in Colorado: In “Phase 1B,” which is expected to continue through the winter, first responders — like firefighters and police officers — and people who work in home health, hospice care and dental settings will be prioritized to receive vaccines. A vaccine developed by Pfizer, which requires two doses, could be approved for emergency use by the Food and Drug Administration in the next five days. Another vaccine being manufactured by Moderna, which also requires two doses, could be available as soon as a week after the Pfizer vaccine gets the OK from federal regulators. Colorado has 46,800 doses of the Pfizer vaccine on order, which could arrive as early as the first half of next week. The state also plans to submit an order this week for 95,600 doses of the Moderna vaccine. The allocation of both vaccines is being controlled by the federal government. Scott Bookman, Colorado’s coronavirus incident commander, said the state expects to receive more vaccine shipments each week, depending on “the supply chain and the availability of this vaccine to the federal government.” “We know that in the early weeks and months of vaccine distribution, supplies will be limited. This have been a historic effort to create this vaccine in a record period of time,” Bookman said. “And while we’re going to get there, it’s going to take many months to get this out to the general public.” Colorado officials have been racing to prepare for the arrival of the vaccine, running tests and developing protocols to ensure the state doesn’t waste any doses. CDPHE and Polis’ office are also working to ensure the vaccine is stored securely and can’t be stolen or tampered with. “The vaccine is really a gateway to the end of the pandemic,” Gov. Jared Polis said Thursday. “We can see the end in sight.” “Phase 2” of Colorado’s vaccine plan is expected to begin in the spring and include essential workers — like teachers, grocery store staff and meatpacking employees — and people age 65 and older. Anyone with a preexisting condition, like diabetes, chronic lung disease, heart disease and cancer, or who is immunocompromised will also get a vaccine during this phase. People between the ages of 18 and 64 who do not have high-risk conditions will be vaccinated in “Phase 3.” Bookman said it’s unclear how long the third phase will last and that it depends on how much supply Colorado receives from the federal government. Health officials cautioned that all of their timelines for vaccine distribution could change based on availability. A screenshot of Colorado’s final vaccine distribution plan. “We know that early doses will be limited,” Bookman said, “but they will expand.” Bookman said the vaccine will be provided for free to anyone who wants it.

How the plan changed

The new plan differs in significant ways from the initial version that the state submitted to the federal government in October. People who live in nursing homes have been moved up in priority. Health care workers who are not directly treating patients with COVID-19 have been moved down slightly. But the biggest change is that the state has removed people who live in congregate housing situations — namely prisoners — from the priority list entirely. People in those living situations — such as college students living in dorms, seasonal workers at ski areas living in shared housing, people experiencing homelessness living in shelters, and people who are incarcerated — had been at a now-deleted “Phase 2A” of the initial plan. Public health experts had urged making them a priority because they are at high risk of catching and transmitting the virus, creating large outbreaks that can spread across entire communities. As of last week, 14 of the state’s 15 largest COVID-19 outbreaks had been in correctional facilities or on college campuses. At least 14 Colorado prisoner deaths have been tied to COVID-19. But, in his announcement on Wednesday, Polis made clear that the main consideration for the new priority list was whether someone is at increased risk of death from COVID-19. “If we want to save lives, we need to prioritize based on who is the most vulnerable from this virus,” Polis said. “… The moral path for society to take is to protect those who are far more likely to lose their lives to the virus.” Bookman echoed that sentiment. “It does not matter where you live, it matters what you’re susceptibility to this illness is,” Bookman said. The Colorado Territorial Prison in Cañon City. (Frank Carey, via Creative Commons) The new plan still prioritizes people who are “workers serving people that live in high-density settings.” Those individuals are placed in Phase 2 of the vaccine rollout, meaning, for instance, that people who work in homeless shelters will likely be eligible for vaccination before many people experiencing homelessness are.

Public health and medical experts worked for months to create the state’s initial vaccination priority plan. An advisory committee of medical experts — the Governor’s Expert Emergency Epidemic Response Committee — drafted one plan. The Colorado Department of Public Health and Environment had its own teams also working on rollout plans, and the two were ultimately merged to create the plan the state sent to the federal government earlier this year. TODAY’S UNDERWRITER That initial plan largely followed the advice of a committee of the National Academies of Science, Engineering and Medicine, which also singled out people living in congregate housing as being worthy of priority. Two experts — Colorado Trust CEO Dr. Ned Calonge, previously the state’s chief medical officer, and Dr. Jonathan Samet, the dean of the Colorado School of Public Health, who is leading Colorado’s pandemic modeling efforts — reviewed and provided feedback for the National Academies report before it was released. Dr. Anuj Mehta, a pulmonologist with Denver Health who helped write the GEEERC’s plan, said he always understood that the draft plans would be changed as the vaccines’ arrival drew near, and he said he agrees with some of the changes . For instance, he said it makes sense to move people living in nursing homes up on the priority list — especially now that CVS and Walgreens have teamed up in a plan to ease the logistical challenges of vaccinating so many people in so many different locations. Mehta said it also makes sense to prioritize health care workers based on their risk of being exposed to the coronavirus. But Mehta said he believes the state should have given more thought to removing people in congregate housing situations, including incarcerated individuals, from the priority list. “They are at high risk of contracting the disease and, from a purely scientific and ethical perspective, they can potentially be a vector back into the community if they’re released,” Mehta said. Dr. Anuj Mehta, a pulmonologist and critical care specialist at National Jewish Health in Denver. (Provided by National Jewish Health) Mehta, who regularly works with COVID-19 patients, will likely be among the state’s first to receive the vaccine. But he said just the first chunk of Phase 1 will still take weeks to complete. The vaccine can cause side effects like fever or aches. Immunity isn’t instantaneous after receiving the vaccine, so health care workers who come down with a fever the day after being vaccinated won’t be sure if that’s a side effect or if it’s the first sign of a coronavirus infection. That means hospitals will have to stagger the rollout to prevent large numbers of staff calling in sick on the same day. But Mehta said he is confident in the safety of the vaccine, especially after the FDA released a trove of data this week. “I’ll be very proud to be one of the first to get the vaccine,” he said. The governor promised Wednesday that vaccination information about Coloradans will not be shared with the federal government. That’s despite the fact that The New York Times reported Wednesday that the Trump administration is requiring states to submit the personal information of people who get the COVID-19 vaccine so that it can better track who is inoculated and any adverse reactions. New York Gov. Andrew Cuomo balked at the idea, warning that the information could be used to deport people living in the U.S. illegally. Polis asked Coloradans to be extra vigilant in protecting themselves and others against coronavirus in the next few months. “It’s a marathon,” he said. “We’re getting there.”