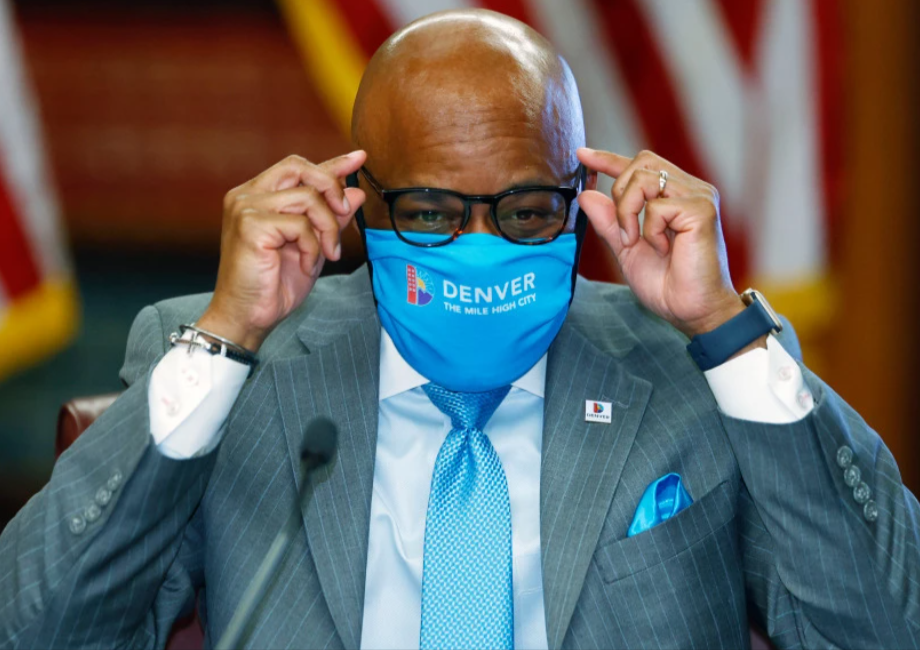 Denver Mayor Michael Hancock adjusts his glasses after putting on his face mask after a news conference on Tuesday, May 5, 2020, in Denver.

Denver moved to Colorado’s second-highest level of COVID-19 restrictions Tuesday, forcing most businesses to operate at a quarter of their capacity in an effort to curb the virus’ spread and avoid overwhelming hospitals.

Denver Mayor Michael Hancock announced the state health department had asked the city to tighten its restrictions after weeks of climbing coronavirus cases and rising hospitalizations.

Denver Public Schools followed with plans to send many of the district’s elementary students — who just had returned to their classrooms — back to remote learning.

“I don’t believe this is Denver’s failing,” Hancock said, blaming the virus’s resurgence on the lack of a national strategy to contain COVID-19. “It is, rather, a failing by those who still refuse to believe in science, and those who do not take it seriously.”

The changes in Denver are in effect immediately, though businesses have until the end of the day Wednesday to adjust. Adams and Arapahoe counties also will see changes starting Wednesday evening as they move into more-restrictive phases of reopening. State and public health officials repeated warnings Tuesday that Colorado’s hospitals are under pressure, and the number of patients could exceed available beds by the end of the year.

“If we don’t do better in Colorado, then more Coloradans will die unnecessarily,” Gov. Jared Polis said during a news briefing.

“Hospital systems could become overwhelmed in the next couple of weeks,” he said. “This has to stop.”

The announcement came one day after a tweet from the City and County of Denver warned of a possible stay-at-home order on the horizon if transmission of the virus isn’t brought under control.

“We want to do everything we can to avoid shutting down our economy again,” Hancock said.

The state’s color-coded dial framework places each county into one of five levels, based on new cases compared to population; the percentage of tests that are positive; and how hospitalizations are trending. Denver is moving into the second-highest, or orange, level, where most businesses can only operate at 25% of capacity.

Source: City and County of Denver, Colorado Department of Public Health and Environment

Lindsey Kubla, owner of Wonderlust Salon in downtown Denver, said she likely will have to reduce the number of chairs from four to three to comply with the new restrictions. That will mean reduced revenue from stylists who rent space there, she said.

“If we go down to being able to work less, I’m kind of hoping everyone is just going to keep paying full time and make a sacrifice,” she said. “I’m a block-and-a-half away from Coors Field, so rent is not cheap. When we were closed for nine weeks (at the beginning of the pandemic) I was still paying the bills and was not asking them for rent.”

Despite the challenges it poses to her business, Kubla said she supports the steps the city is taking to try to curtail the virus. She and her fellow stylists are taking COVID-19 seriously inside the salon and in their personal lives, choosing to keep their kids out of school this year and have their groceries delivered, she said.

“We cannot provide service from six feet away. We have to touch people,” she said. “We feel like we have a greater responsibility to the community because we do touch people.”

Others said they felt their businesses were unfairly targeted.

“It would be really beneficial if there was also some positive aspect,” he said.

Some business owners were unclear if they could even stay open after Wednesday. The state guidelines for counties in the orange level call for gyms and recreation facilities to only offer virtual or outdoor services, but McDonald said talks were ongoing with the state about possible ways to keep those businesses open — sparking much confusion.

City officials said they wouldn’t enforce an order to close gyms as they awaited clarification from the state. Tuesday evening, the health department announced a change to the state’s Safer at Home public health order that will allow gyms in Denver to remain open at 25% capacity, or up to 25 people — whichever is fewer. Danielle Barbeau, the owner of two Denver studios called The River Yoga, was frustrated to be left in suspense. “This is so typical for how this has gone, every time, for us,” she said.

Back to remote learning

The state guidelines suggest schools and colleges consider holding classes online or with a hybrid model, but don’t require that. Nevertheless, DPS decided to send many of its elementary students back to remote learning less than one week after reopening those facilities.

According to Chalkbeat Colorado, which reviewed an internal DPS document, students in third through fifth grades will return to online learning beginning Monday and attend classes virtually through the end of November.

After delaying the start of in-person learning for middle and high school students, the district decided to postpone any in-person classes for secondary grades until next semester. The current semester ends on Dec. 18.

Facilities in Denver that have state-approved variances, including the Denver Zoo, Cherry Creek Mall and Denver Botanic Gardens, can operate as usual. Museums will be limited to 25 people per room, however.

Voting centers aren’t affected by the changes, Hancock said, and houses of worship may continue to operate at 25% capacity, or up to 50 people.

And grocery stores, as essential businesses, do not have to limit capacity, city officials said.

People can still take their children trick-or-treating this weekend and enjoy activities like shopping and going to restaurants, McDonald said, but they need to wear masks and stick to small groups, ideally those they already live with.

“What we’re saying is do them responsibly,” he said.

Adams County will face the same restrictions as Denver starting on Wednesday evening as it moves into the orange level.

The state health department also announced Tuesday that Arapahoe County would move to the middle, or yellow, level on the state’s dial. Most businesses will be able to remain open at 50% capacity, though indoor and outdoor events will have lower attendance caps.

Numbers show no signs of improving

To loosen the new restrictions, Denver will need to cut its rate of new cases by more than half, and keep them down for at least two weeks.

In the most recent two weeks, Denver has averaged 385 cases for every 100,000 people, and would need to get that down to 175 per 100,000 people to allow businesses to host more customers, McDonald said. So far, there’s no sign the city is making progress on stopping the virus’ spread, and waiting longer would make it even more difficult to control, he said.

“All indications are it’s going to continue to increase unless we all pull together,” he said.

The increasing percentage of tests coming back positive indicates the city isn’t just finding more cases by testing more people, McDonald said. About 8.1% of tests were positive over the last week. Experts advise that no more than 5% of tests should be positive, because as the rate rises, it’s more likely a county or state is missing infections.

Under the state’s framework, if a county’s metrics start moving in the wrong direction, it gets at least two weeks to try targeted measures before the state health department can order broad restrictions.

Denver placed more restrictions on colleges in late September to try to stop the spread there, but that didn’t curb the number of new cases. The city also limited gatherings to no more than five people and ordered residents and visitors to wear masks in more public places starting Oct. 16, but that has yet to show an impact.

Hancock acknowledged “COVID fatigue,” likening the last seven months to pushing a boulder uphill. “That boulder has rolled back on us because some people decided they didn’t want to push anymore,” he said.

New coronavirus infections are at their highest level statewide since Colorado has had reliable data, and more people are hospitalized for COVID-19 than at any point since mid-May. On Friday, the state health department limited gatherings to no more than 10 people from two households, with exceptions for a handful of counties with few cases.

As of Tuesday, 538 people are hospitalized statewide with confirmed COVID-19 — a level not seen since May, Polis said. The increase comes as hospitals already are taking a handful of patients from Texas, Wyoming and Montana, where beds are running out.

Colorado hospitals are not in such a dire position, but some facilities are making plans to increase the number of intensive-care-beds available, Polis said.

“At this point we are seeing a number of our hospitals that are stressed,” said Scott Bookman, the state’s COVID-19 incident commander. “Some of our hospitals have had to manage their elective surgeries from day to day, but nobody is at the point where they’re turning away patients, where we’re thinking about crisis standards of care.”

Centura Health has a couple of hospitals across its system that “are pretty full,” said Dr. Stephen Cobb, chief medical officer for the Denver area. As COVID-19 has spread more through communities, some workers have gotten sick, which has caused staffing issues at Centura locations in Kansas, he said.